Among the many benefits of living on the northern California coast, the allure of the extended wildflower season is not to be underestimated. A couple of recent jaunts corroborated my observations that the variable phenology — the annual timing of plant phases, such as reproduction (essentially flowering and fruit and seed production) and growth, bud break, and leaf senescence — of coastal California’s native plants provides a wealth of blossom-watching to be treasured year-round. Late summer is no time to rest on one’s laurels – a little exploration can offer plenty of gold.

About mid-summer, a friend alerted me to a population of pink sand-verbena (Abronia umbellata ssp. breviflora) in the Ten Mile Dunes, on the Mendocino Coast north of Fort Bragg, so I spent a mid-August afternoon there trudging across sandy slopes, sliding into hollows, and muddling through marsh. Not only did I find pink sand-verbena, a rare species that typically grows in the coastal strand (upper beach & low dunes) plant community, but also its congeneric cohort, yellow sand-verbena (Abronia latifolia), a more abundant species of coastal dunes.  These two sister species share the ample sand estate with delicately flaring pink- and white-striped trumpets of beach morning-glory (Calystegia soldanella). Nearby, the unassuming (and also rare) Wolf evening-primrose (Oenothera wolfii), whispered in soft yellow from amidst a riparian thicket of Hooker willow (Salix hookeriana), weedy non-natives such as yellow glandweed (Parentucellia viscosa) and bird’s-foot trefoil (Lotus corniculatus), and the natives: lavender-flowering American cornmint (Mentha canadensis), pink-flowering hairy willow-herb (Epilobium ciliatum), and violet marsh speedwell (Veronica scutellata), a kaleidoscope of colors against the bleached-gray corpses of long-since-felled timber clogging the outlet of Fen Creek.

A few days later, I sought a more familiar population of the pink sand-verbena near the outlet of Virgin Creek – alas, I’ve not seen any plants there now for 3 years. Nevertheless, I intended to make the most of my short walk, so I caroused the low dunes and spring outlets along the coastal bluffs in search of solace. Much resounding joy! Sand, stones, and seeps were abundant with color and texture: Bolander’s golden-aster (Heterotheca sessiliflora ssp. bolanderi) vying for gaudiest golden composite (think smallish sunflowers) with gumplant (Grindelia stricta ssp. platyphylla), while their more demure cousin seaside daisy (Erigeron glaucus) appealed with its pink tresses framing shining golden faces. Nearby, coast buckwheat (Eriogonum latifolium) sprawled luxuriantly atop dunes and bluffs, perhaps enticing me in order to meet its steadfast, if scrawny, sibling, dune knotweed (Polygonum paronychia), a faithful stalwart of the local dune scrub plant community. The sight of water (albeit a trickle) soon set my heart racing, as I’ve long been attracted to the small coastal seeps that form verdant oases amidst the otherwise parched and saline landscape – coastal bluff faces often feature distinctively green and colorful swatches of vegetation amidst more drought-hardy shrubs and perennials, a telling sign that ground water has surfaced.  I was not to be disappointed, as I soon spied a few of the most boisterously blooming common monkeyflower (Erythranthe guttata) plants alive. Not to be outdone, a couple of Angelica hendersonii sirens just about fell off the bluff beckoning to me with sweet, lilac-tinted domes of white, towering above the rugose ruffles of their leathery-green leaves. Back in the soggy, sandy, stony seep, the coastal bluff- and prairie-wetland mainstay cow clover (Trifolium wormskioldii) sat astraddle perfect pincushions of the diminutive low-lateral bulrush (Isolepis cernua)  nestled amidst a mat of lemon-yellow flowering beach silverweed or cinquefoil (Potentilla anserina ssp. pacifica).

“Wow, lots of gold on them thar hills,” I mused, almost startled as at yet two more shimmering dune graces smiled up at me from their sandy digs: beach evening-primrose (Camissoniopsis cheiranthifolia) and the gleaming gold-orange north-coastal California poppy (Eschscholzia californica). Wending my way across the brown prairie, past two species of native lavendar-rayed daisies with little to care about what humans call them: Pacific American aster (Symphyotrichum chilense), generally in moist to seasonally wet soils, and California sand-aster (Corethrogyne filaginifolia), more common in better drained drier soils, including dune sand.  Still more gold to be discovered, as I spied yet one more gladdening glimmer in the grassland, coast goldenrod (Solidago spathulata). How fitting a finale was this for my summer stroll — yet one more gift of gold, reflecting back the late summer sunlight along the California coast. 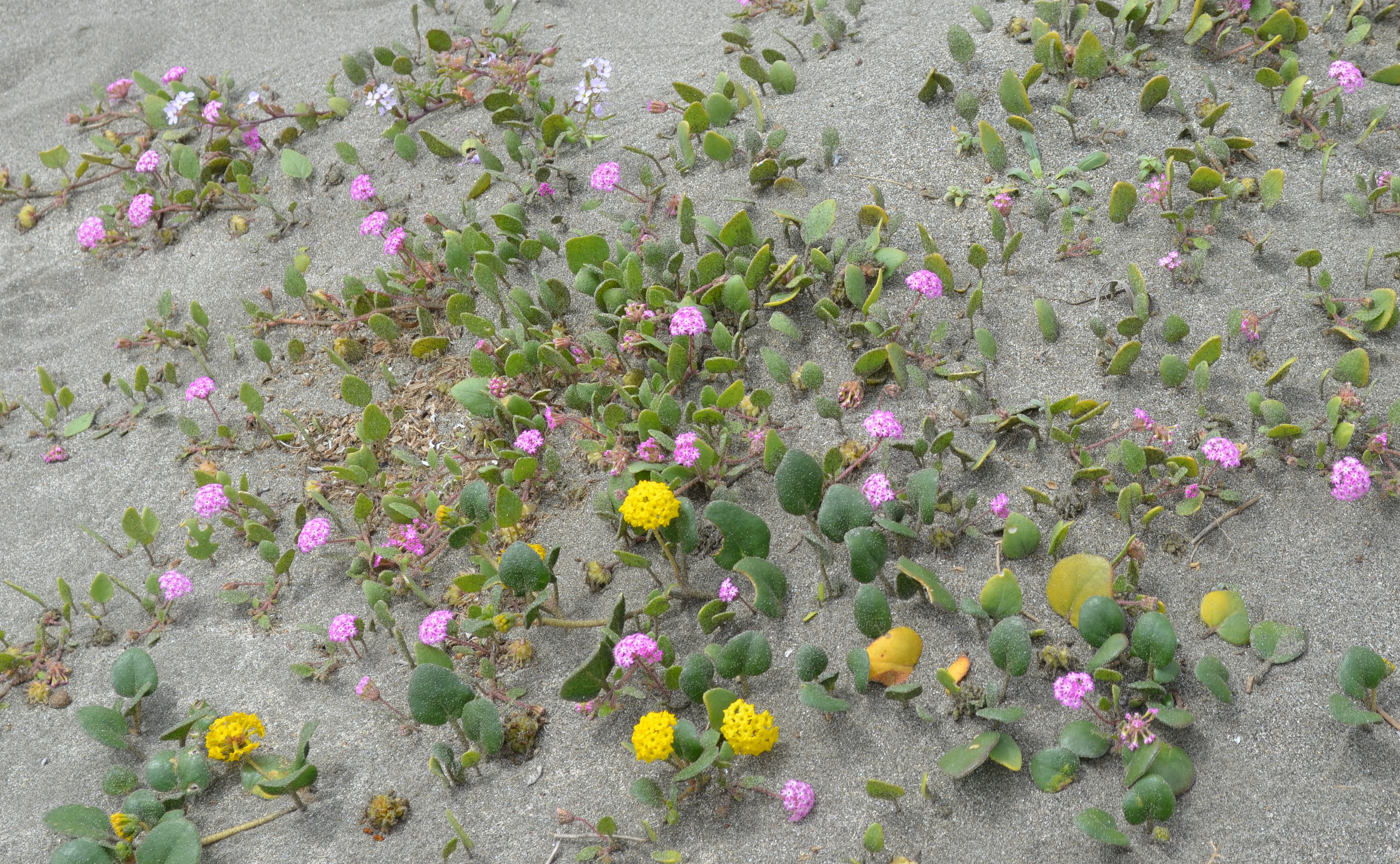 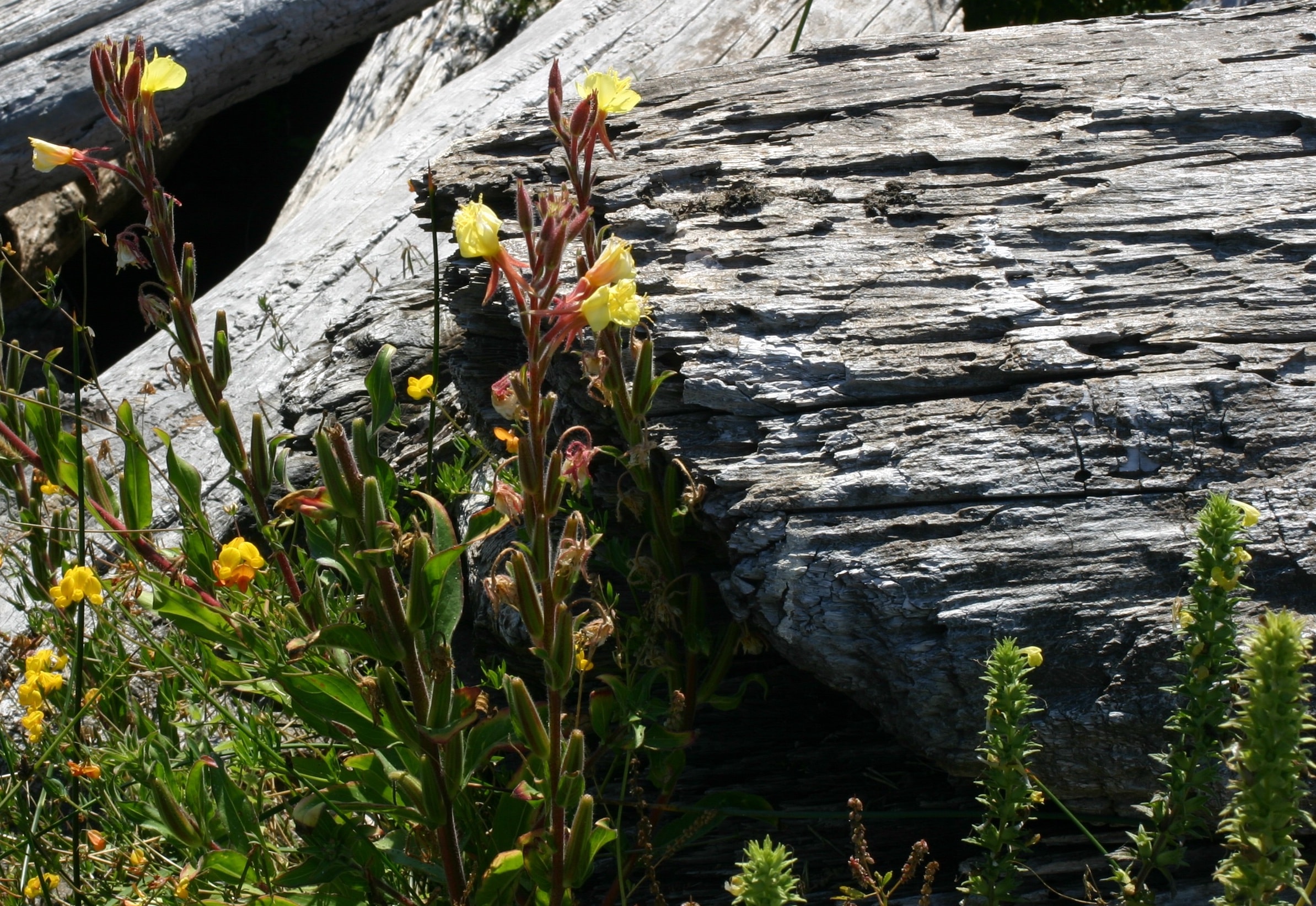 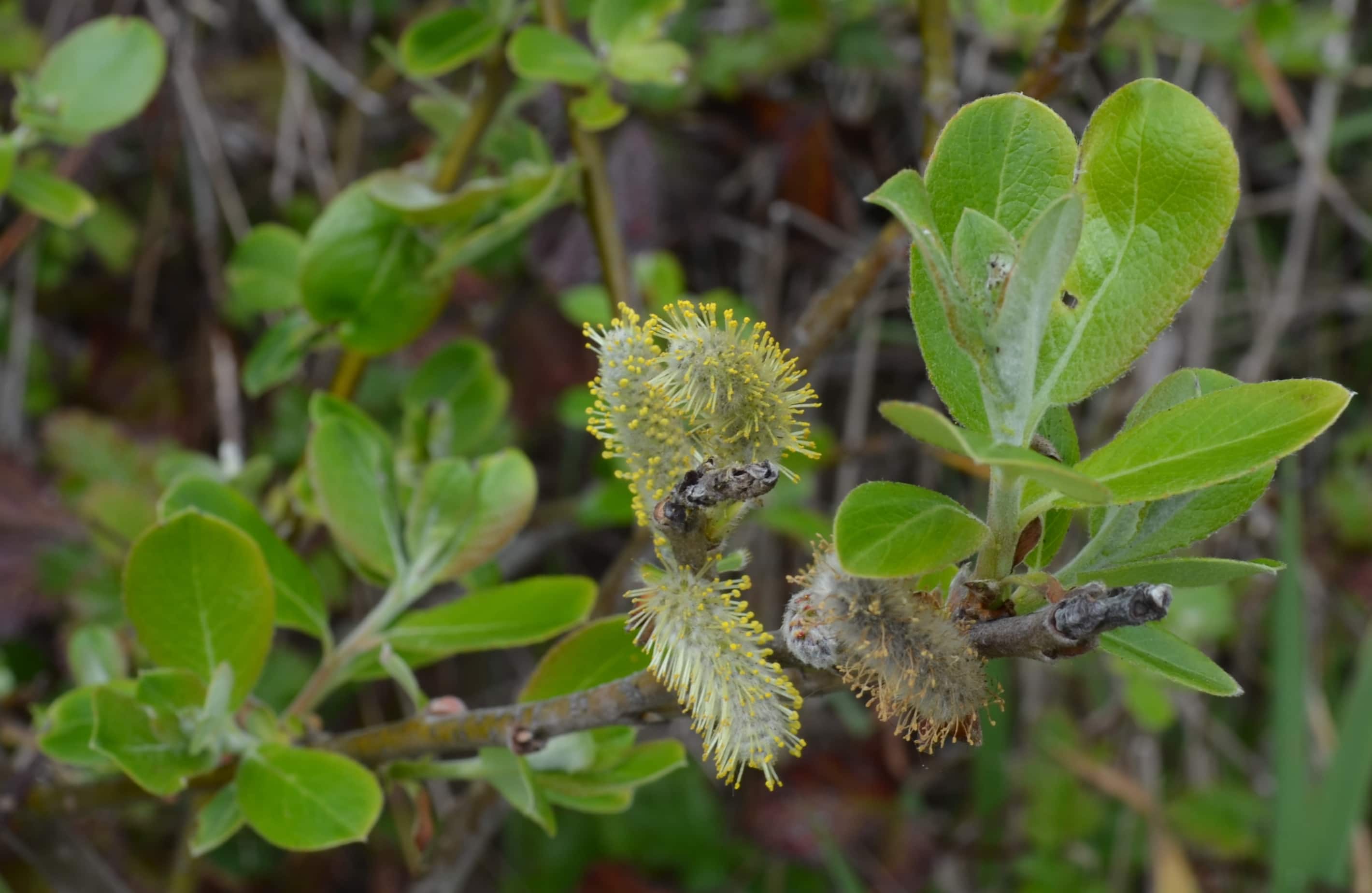 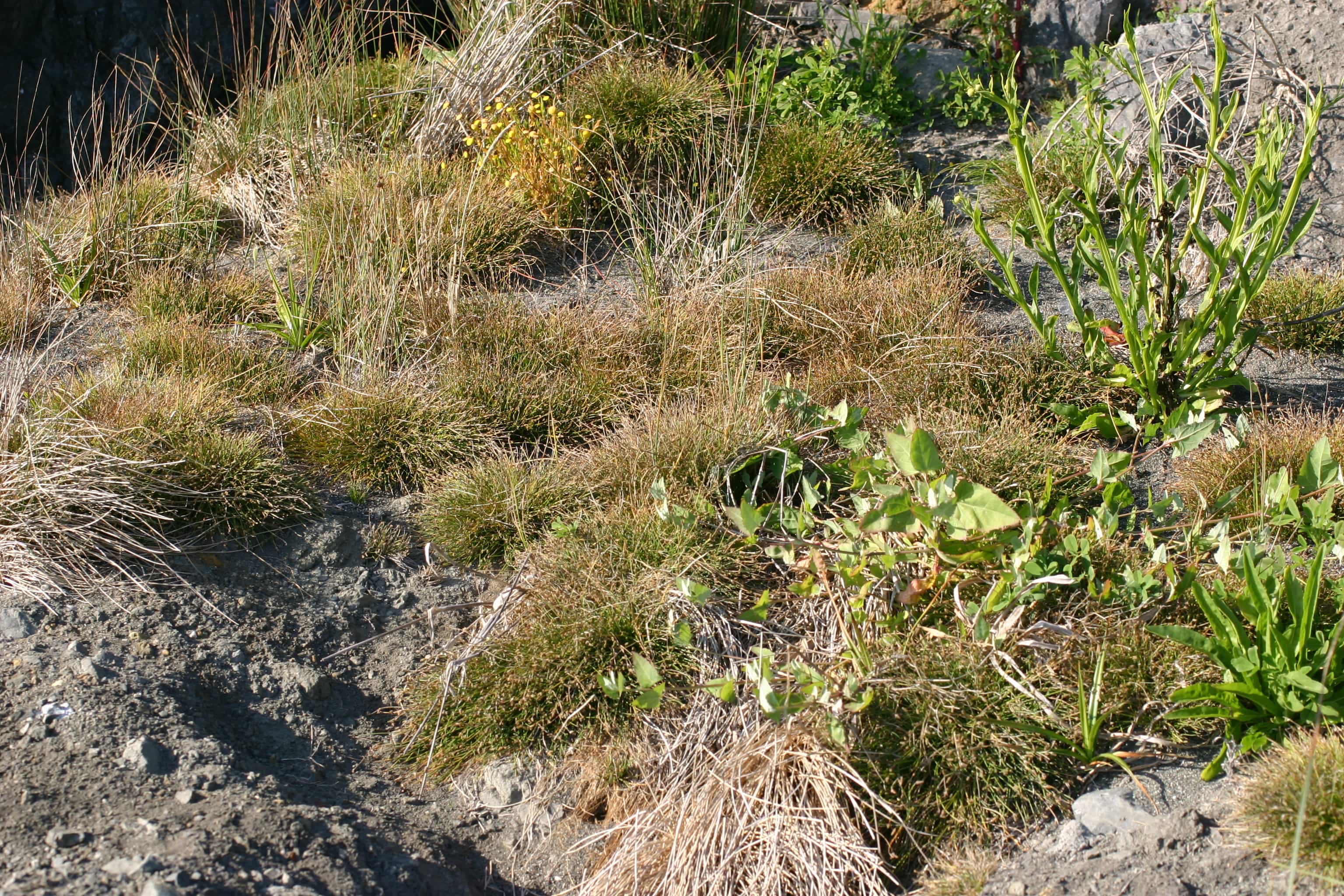 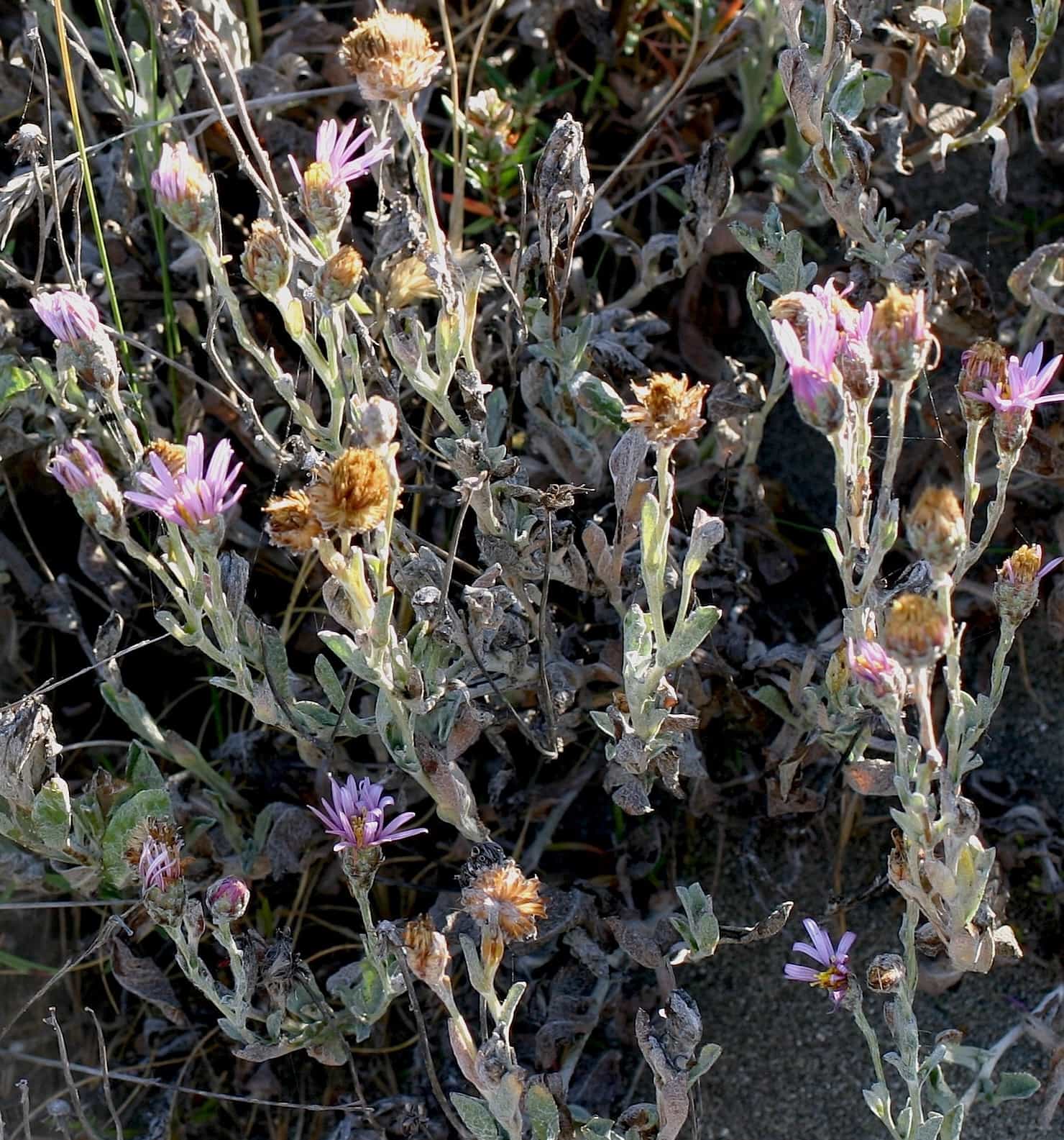 Get news about classes, plant walks, and plant articles!